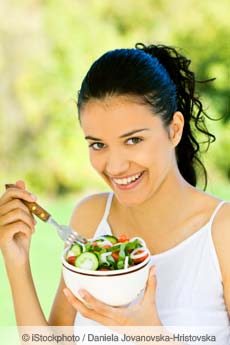 (Glenn) Many of you my already know that I am an advocate of eating the Paleolithic (caveman) diet.

Plenty of people shudder when they hear I eat raw meat. (What did cavemen do before fire?)

One of my highly recommended doctors (Emanuel Veripatis from Your Health Manly – Sydney) agrees.  He says if you eat a paleo diet then you should give yourself and your household members a worm treatment every 3 months… just in case.

If the meats are from a reputable source and well prepared and handled then you will not get sick (as some think you will) but you will get the absolute best from the meat.

Of course I also eat as many raw vegetables and fruits as possible My father was a greengrocer so the whole family was raised on 12 (yes 12) fruits and vegetables per day. I continue to eat close to that amount to this day.

By the way my father lived to 95 and died of old age (a rarity these days… his body just wore out) and my mother is about to turn 90, and she still walks and shops for herself every day.

Scientists have begun exploring what can be learned from the diet of cavemen who lived ago, based on vegetables, fruit, nuts, roots and meat. Cereals, potatoes, bread and milk were not featured at all.

It was only with the dawn of agriculture (around 10,000 years ago) that our diets evolved to include what we think of as staple foods now.

Research will focus on how the food eaten by hunter-gatherers could enhance modern day nutrition.

In contrast to the cereal crops we rely on now for the basis of our food, the pre-farming diet contained fewer carbohydrates, less fat and more vegetables. So was it a healthier diet?

“It seems so,” Mark Thomas, professor of evolutionary genetics at University College London, told BBC News. “Paleolithic man may have died earlier than we do now, but he didn’t die of bad nutrition.”

“We need to decrease our reliance on refined sugar and a heavy carbohydrate diet, and replace some of the things we have lost,” says Professor Monique Simmonds, head of the sustainable uses of plants group at the Royal Botanic Gardens, Kew, in the BBC News article.

Cavemen who lived long ago were eating a lot healthier than most Americans today, according to even preliminary research into the ancient hunter-gatherer diet.

During the Paleolithic period, which spans to 12,000 years ago, people ate primarily vegetables, fruit, nuts, roots and meat. Today, these healthy staples have been largely replaced with refined sugar, high fructose corn syrup, cereal, bread, potatoes and pasteurized milk products … which are doing no favors for modern day health.

Can a Stone Age Diet Make You Healthier?

One of the most thorough looks into “Stone Age” nutrition was done by Dr. Loren Cordain, author of The Paleo Diet and considered to be one of the world’s leading experts on Paleolithic nutrition.

Based upon scientific research examining the types and quantities of foods our hunter-gatherer ancestors ate, the foundation of “The Paleo Diet” is lean meat, including ostrich and bison as well as organ meats, seafood, fresh fruit and non-starchy vegetables — a far cry from the standard American diet.

“Simply put, human nutritional requirements for optimal health are determined by our genes, and our genes are shaped by the environment of our ancestors through natural selection. Many modern staples and processed foods were not present throughout most of the more than 2 million years hominin species have been present on earth.

The nutritional qualities of modern processed foods and foods introduced during the Neolithic period are discordant with our ancient and conservative genome. This genetic discordance ultimately manifests itself as various chronic illnesses, which have been dubbed “diseases of civilization.”

By severely reducing or eliminating these foods and replacing them with a more healthful cuisine, possessing nutrient qualities more in line with the foods our ancestors consumed, it is possible to improve health and reduce the risk of chronic disease.”

Millions Have Trouble with the Modern Day Diet

A perfect example of Cordain’s findings are the vast numbers of people who have trouble digesting grains and pasteurized dairy products.

Gluten, a protein found in grains such as wheat, rye and barley, wreaks havoc in people with Celiac disease, triggering an immune reaction that damages the small intestine and prevents absorption of nutrients.

Large numbers of people, perhaps even the majority of the population, are adversely affected by gluten on some level, and most of them do not have full-blown celiac disease, just a lesser form of gluten intolerance.

Grains and sugars are inherently pro-inflammatory and will worsen any condition that has chronic inflammation at its root — and not just inflammation in your gut, but anywhere in your body.

In fact, if you want to avoid heart disease, high cholesterol, type 2 diabetes or even cancer, you will want to severely limit your grain consumption, or avoid grains entirely.

During the paleolithic period our ancestors may have died much earlier than we do nowadays … but they didn’t die of heart disease, diabetes and cancer — which are among the leading causes of death in 2010, and all are related to diet.

In my experience about 75-80 percent of ALL people benefit from avoiding grains, even whole sprouted grains, whether you have celiac disease, gluten intolerance or neither of those conditions. Your body is simply not designed to eat the high levels of processed grains so common in diets today.

The same holds true for pasteurized dairy products. Drinking pasteurized milk is frequently associated with a worsening of health, and this is largely due to the pasteurization process itself. As Sally Fallon of the Weston Price Foundation stated:

Raw dairy products, which have their fats, enzymes and probiotics intact, are typically much easier to digest and are associated with health improvements, rather than harm. While raw dairy did not make an appearance into humans’ diets until much later in history, it is a much more natural food than the pasteurized products so widely circulated today.

What Happened to Diversity?

Our Stone-Age ancestors not only ate more natural foods than we do today, but they also ate an incredibly wide variety of them. Dr. Mark Berry, who is involved in the Paleolithic nutrition research, explained that back then humans ate 20-25 different plant foods a day.

Today, many Americans struggle to fit in five.

The truth is, the typical American diet is incredibly monotonous and does not include a variety of healthy foods that your body was designed to thrive on.

As Mark Hyman, M.D., editor-in-chief of Alternative Therapies in Health and Medicine, wrote:

“As a species, we once ate a complex unrefined wild diet consisting of a wide variety of plant and animal foods rich in phytonutrients, fiber and omega-3 fatty acids. Now, our monotonous diet triggers different and diseased patterns of gene expression.

The USDA reports that the top nine foods eaten by Americans are:

All of these foods are foreign to our genome that evolved on a Paleolithic diet. This mono diet creates altered patterns of gene expression that lead to disease, including food allergy or sensitivity.”

In fact, you wouldn’t be able to find many of the wild varieties of plant foods eaten by cavemen even if you wanted to, because modern agriculture has largely taken over the food supply and tweaked and shrunk it to where only a few varieties of wheat, corn and other plant foods are left.

Researchers are now trying to uncover the natural genes of various plant species — the ones that grew in the wild before big agriculture and genetic modification took over.

There’s no doubt that your body has a unique biochemistry that predisposes you to thrive on a certain diet. That diet is certainly not one that’s focused on the relatively “new” inventions in the food arena, like white bread, white sugar and processed cheese.

Instead, it may be high in green vegetables and healthy fats, or you may require a higher protein percentage with your meals. You see, modern humans have developed so there is an enormous level of biochemical and genetic individuality that essentially guarantees that there is no perfect diet that will work for everyone.

While our Stone Age ancestors may have all been able to thrive on a similar whole food diet, the U.S. population has a widespread heterogeneity; we are all uniquely designed and require customized plans.

This is why I highly recommend a program called Nutritional Typing, which is a central part of my health plan and is available for free on my site.

For many years we charged $29 for this test, but I didn’t want the cost of the test to prevent anyone from taking it. So please take advantage of this free test.

Nutritional typing is a way to determine what YOUR customized diet is, and it is not even a one-size-fits-all within each nutritional grouping. If you take nutritional typing seriously, its guidelines will help you modify your food intake until you find the right balance.

Because food selection today is no longer dictated by your environment as it was so long ago, but rather by your choices at the supermarket, you owe it to yourself to uncover which choices will lead you to optimal health.

Read this article and seethe additional references on Mercola.com